Posted on September 30, 2020 by Maddi Hennessey in Auto News 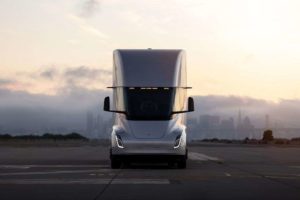 The Tesla Semi was supposed to be here by now, but if you’ve watched the electric carmaker in the past, you know deadlines aren’t really CEO Elon Musk’s jam. But, that hasn’t stopped companies from signing on the dotted line to reserve the upcoming electric semi truck.

On Tuesday, Walmart Canada once again put its money where it mouth is and announced its order of Tesla Semis is now for 130 trucks total. The figure slowly climbed after the retailer’s Canadian operations placed an order for 15 of the semis back in 2017. Walmart Canada said the additional trucks reserved are part of a $2.6 billion investment into reducing carbon emissions. The retailer aims to operate with zero emissions by 2040. It’ll take more than 130 electric semi trucks, but it’s a start. As for why the Tesla Semi is the retailer’s transport solution, it said the ability to go 500 miles on a single charge fits the bill; typically, the company’s fleet system consists of single-day round trips, which makes the Semi ideal.

We do wish the order announcement included some clues into when the Semi will finally hit the road. The electric truck debuted three years ago now and was meant for production late this year. However, Musk declared the commercial vehicle wouldn’t be ready until 2021. A leaked email claimed Musk is serious about putting the Semi into mass production in the near future, however, and we know the automaker’s upcoming Gigafactory in Austin will build the truck. Tesla’s been mighty busy working on scaling up Model 3 production and kicked off Model Y assembly earlier this year. And to be fair, the coronavirus pandemic has tossed unforeseen hurdles at every automaker.